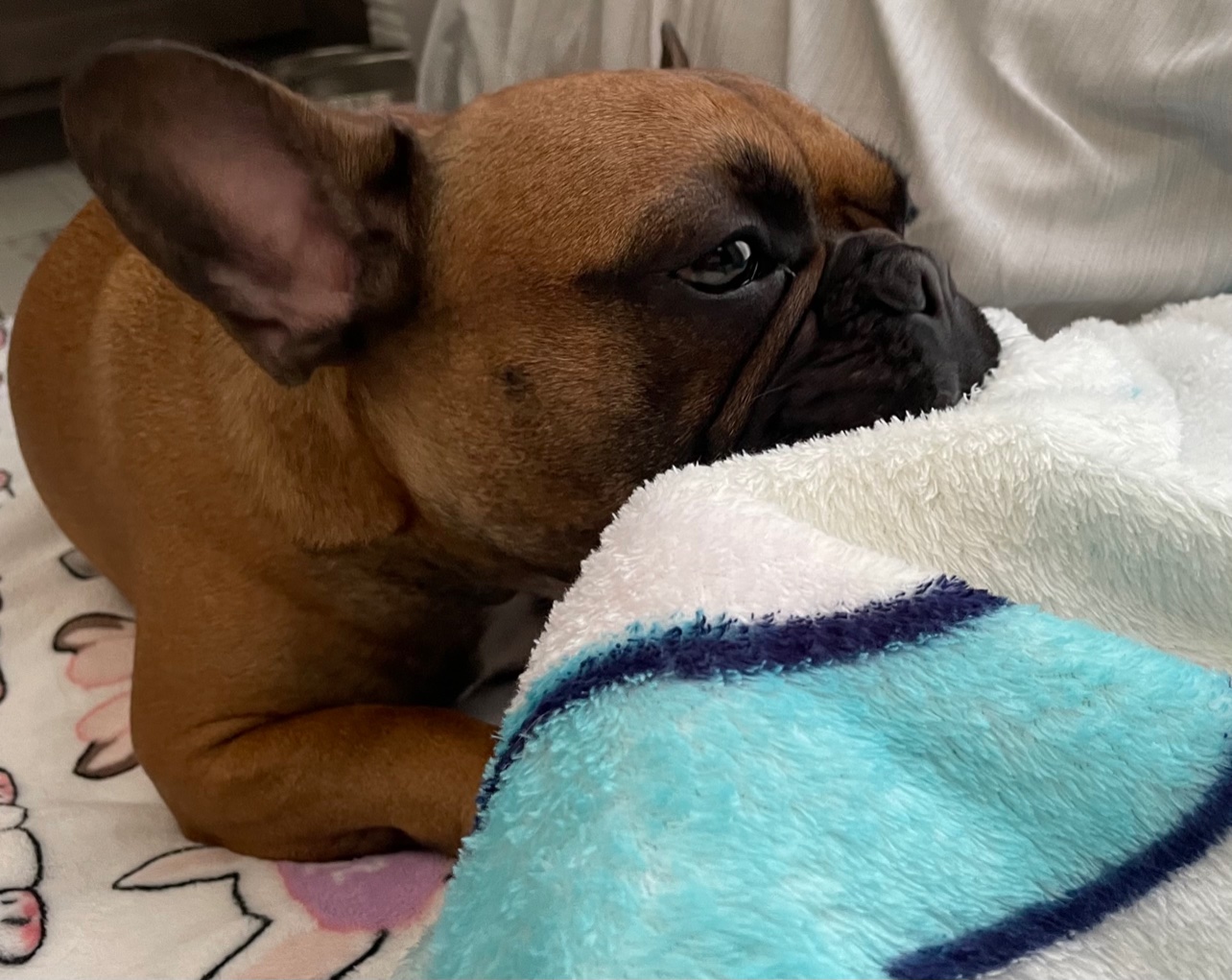 I must admit that as I am writing this, I am worried about my little boy. I know he is fine. He is eating, drinking, and acting himself. Nevertheless, as a frenchie mama, I cannot help but worry about him. You see, even though he is acting normal, he is obviously in pain. He yelps when he goes to the bathroom and he bleeds a bit from one of his incisions. I have already brought him back to the vet, they monitored him for three hours, and all is good. They noted he is swollen and that is to be expected. What did he have surgery for in the first place you ask?

It all started during a routine tail pocket cleaning. I have been diligent about cleaning Dozer’s tail pocket on a regular basis. Approximately one month ago, he started growling at me when I would clean it. If you know Dozer and his sweet disposition, you know this is very uncharacteristic of him. I knew something must be wrong, but I gave it a couple of days. After a couple days of him growling at me every time I attempted to clean the tail pocket, I called my veterinarian and made an appointment. They prescribed an anti-inflammatory and antibiotics. After a few days of medication, he was still extremely uncomfortable and still growling when I attempted to clean his tail pocket, so my veterinarian prescribed another medication. Still, there was no improvement. During the initial appointment, they examined his tail and noticed that it was growing into him and thought this may be the culprit. Consequently, they x-rayed the tail and discovered malformations in the vertebrae. However, they were trying to avoid surgery if possible. Since the medication was not working after several more days, they asked me in for another consult to discuss surgery. During the consult, I was informed that surgery was necessary, and the vet was confident the surgery would be successful, so we set it up for the following week.

The funny thing about this impending surgery was that I was less nervous about this surgery than I was when I was getting Dozer neutered. Why is that you ask? Like many frenchie parents, I was worried about putting him under anesthesia. When I brought Dozer home at ten weeks of age, I started him with a different veterinarian than I have now. I did my research before choosing this veterinarian. However, I did not know them and when I asked questions about the neutering process, I was not receiving complete answers and the short answers they gave did not put me at ease. I was a nervous wreck before and during his neutering procedure. He did well. However, after this experience, I decided that I wanted a different veterinarian particularly since I still needed to have Molly and Harley spayed. I chose to consult with a veterinarian who had a good reputation in town and who I had recently discovered owned a French Bulldog himself. The first consult with this veterinarian was a completely different experience in that he went into great detail about his spaying process. He also let me know that he would run bloodwork ahead of time to rule out potential problems. When I asked the previous veterinarian about bloodwork, their response was “we will if you want us to.” By the time I spoke to the new veterinarian, I had also discovered the French Bulldog Rescue Network Anesthesia Policy and this new veterinarian’s anesthesia procedures lined up well with that policy. Because I was so comfortable with this veterinarian in general and comfortable with his anesthesia protocol, I was much more at ease while Dozer was in for surgery. I dropped him off at 7:30 a.m. on Tuesday, April 20th and picked him up the same day at 4:30 pm.

The doctor called me at approximately 1:30 p.m. that day, just as soon as the surgery was complete, to let me know that all went well. He explained that the surgery ended up being much more involved than he expected since the tail was embedded deeper than he thought and the tail had no give to it. He thoroughly explained the entire surgery and let me know that while it was unlikely, there was the slightest chance that some nerves were affected due to how deep he had to go to remove the tail. I, of course, asked the worst case scenario and he let me know that nerve damage and incontinence would be the worst-case scenario. However, the likelihood of this happening was almost zero, not zero, but almost zero.

If you are wondering how Dozer is now, he is good. He is currently laying right next to me sleeping. The doctor increased his dose of pain medication since he is having pain while defecating so it is making him sleep more. However, when he is awake, he is his normal sweet loving self.

What I would like you to take away from this post is to make sure you feel comfortable with any surgery or procedure. How I did this was to choose a veterinarian I was comfortable with, making sure they planned to run bloodwork to rule out any problems, and ensuring their anesthesia policy compared to the French Bulldog Rescue Network Anesthesia Policy. Additionally, if you have a hard time getting your furbaby to take pills like I did, try this Pet MD Wrap A Pill Peanut Butter Flavored Pill Paste for Dogs – Make a Pocket to Hide Pills and Medication for Pets – 59 Servings. It was a game changer for me.

Lastly, I have been extremely thankful to have pet insurance during this time. Every claim I have made so far has been covered and right now that is just one less worry for this frenchie mama. For more information about pet insurance and for policy comparisons, click here: https://thefrenchiemamablog.com/2021/01/02/best-pet-insurance-for-your-french-bulldog/