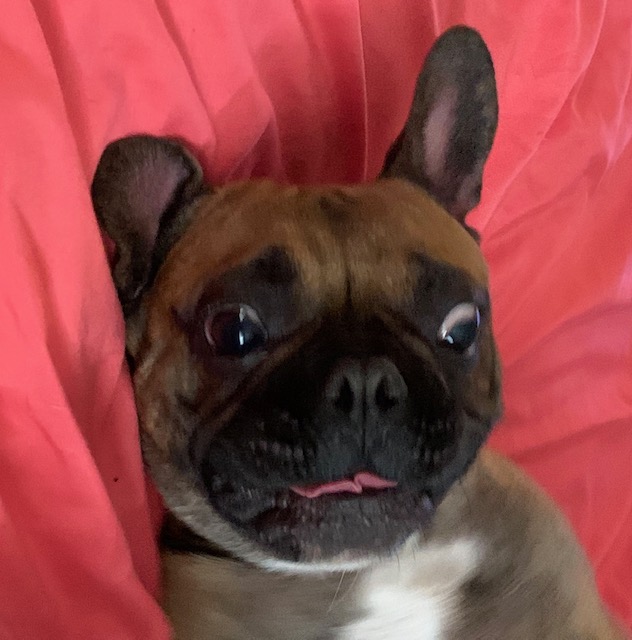 The first time I witnessed Dozer running as fast as he could across the couch, then down onto the ground, across the living room, back up on the couch, then over to the ottoman and back around again and again like a bat out of hell, I thought “What the heck is wrong with this crazy dog?” When dogs get the zoomies, it seems as if they go from zero to one hundred miles per hour in a split second. Sometimes they will tuck their bums under and explode into a sprint of what looks like utter merriment. While the zoomies are not specific to frenchies, I never personally witnessed this phenomenon until I became a frenchie parent. I relish when my frenchies get the zoomies. It is certainly entertaining to watch.

What are the zoomies?

Zoomies are short (or sometimes not so short) bursts of energy exhibited by dogs. They are the result of pent up energy. Zoomies are a natural dog behavior which can be expressed late at night, when going outside for a walk, while observing another dog, after a bath, or even after pooping. There is a formal name for the zoomies. It is Frenetic Random Activity Periods or FRAPs for short. Normally FRAPs are totally natural and show that a dog is a happy healthy canine. However, on the rare occasion, it could be a sign of something else such as obsessive-compulsive disorder. A dog chasing their tail for an extended period can be a sign of this disorder. Be sure to pay close attention to your dogs’ behavior before and after the zoomies to clue into whether they are normal happy dog zoomies or something else that could be a sign of an underlying issue.

Is it OK for dogs to engage in the zoomies?

It is absolutely okay for your dogs to break out into the zoomies! I have already mentioned that it is a natural dog behavior. By the way, it is not only dogs that get the zoomies. Other animals such as goats, horses, and cats also get the zoomies. If the animals are somewhere safe when the zoomies come on and they are not going to run into something that may hurt them, you usually do not need to interfere. There is, however, another concern for French Bulldogs in the running and jumping aspect of the zoomies. French Bulldogs are known to be prone to back and hip problems so if they are running and jumping on to and off of high furniture, there is a risk of injury. If you have high furniture, it would be a good idea to invest in ramps or steps and make sure your frenchies use them instead of jumping on and off furniture.

An interesting aspect to the zoomies is that it is extremely hard to distract your frenchie from the zoomies once they start. Neither their favorite treat nor their favorite toy will coax them to stop. But that is alright! Let them go, let them zoom! Zoomies are just one of the many things that make being a frenchie parent fun!

If you have any other interesting facts about zoomies, feel free to reply below.