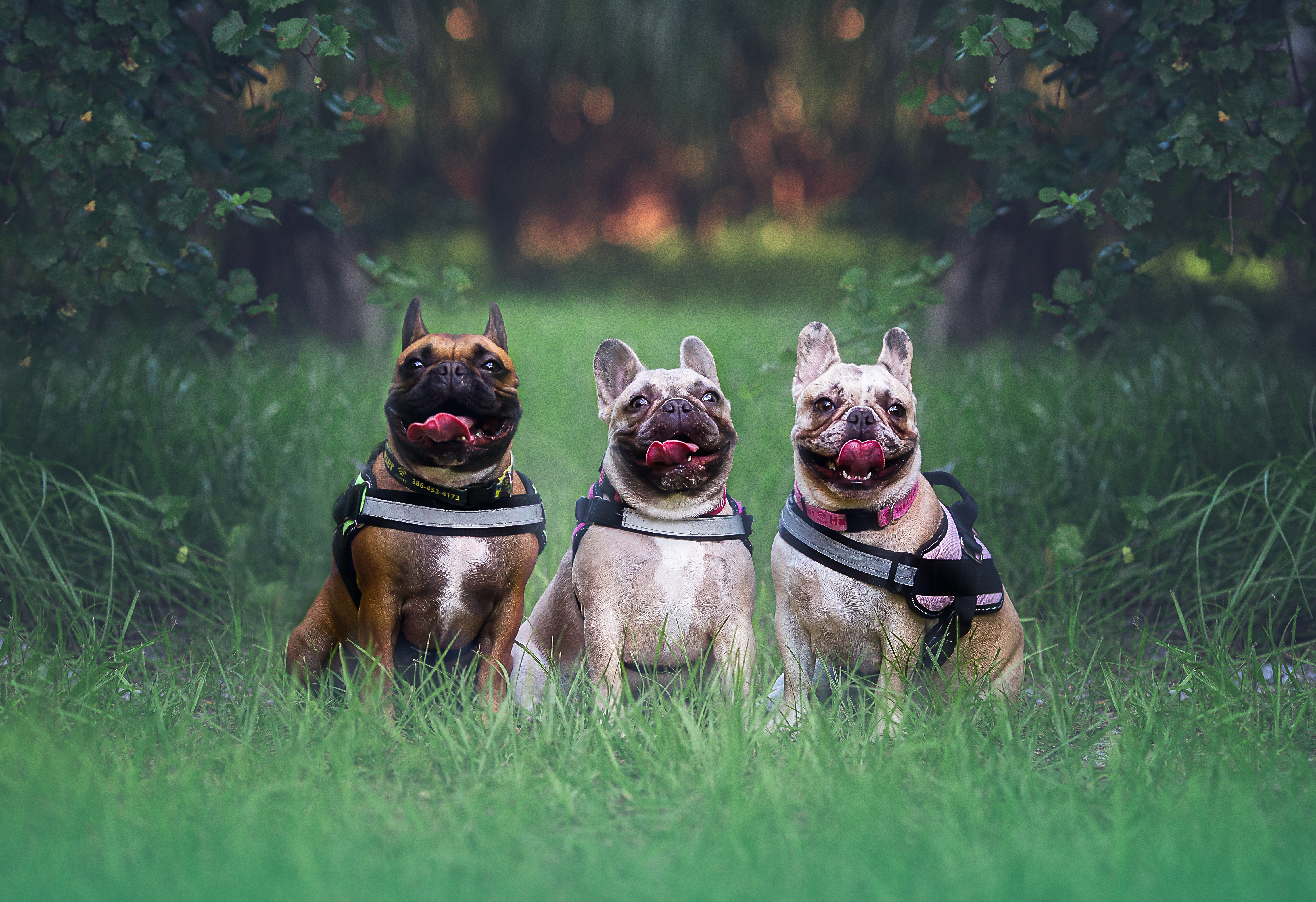 In my last several posts I have covered many of the burning questions frenchie parents ask so I thought it was about time to introduce my crew: Dozer, Molly, and Harley.

Once I completed my research on the breed, I started my search for the perfect frenchie puppy. I found a gorgeous litter of puppies about an hour’s drive away. We made the hour long drive to see Dozer and his brother who was a sable fawn boy. The sable fawn boy was an energetic and adorable little guy. However, there was just something about Dozer. Dozer was this short stocky red fawn puppy with the biggest, most angelic eyes I had ever seen. He ran right over to me and my stepson with his funny distinctive trot that he still has to this day. He loved us from the moment he met us, and we loved him from the moment we met him. The trip home was uneventful until we decided to stop at Wal-Mart to pick up a bed and a crate. You see, Dozer had just been dewormed which we were informed of. However, what I did not know is that deworming causes explosive diarrhea. And where did this explosive diarrhea come out? Well, right in the middle of Wal-Mart and all over what was to be his new bed which was located right underneath him in the shopping cart. We were embarrassed to say the least.

In the beginning, we had a few scares with Dozer which I partly attribute my profound love for him to. About a week after we picked Dozer up, I noticed blood in his stool. Before then, I had never experienced a dog having blood in their stool, so I was terrified there was something fiercely wrong with my baby boy. It turned out he had Giardiasis. He was prescribed antibiotics and it went away, only to come back again about a week after stopping the antibiotics. The second round of antibiotics did the trick though, and everything turned out okay. A couple weeks later, Dozer developed a limp. I had not seen anything happen to him even though I watched him like a hawk, but there was a definite limp. Once again, I got really scared. Yes, I am an overprotective mama! I took him to the vet; they gave him a thorough examination, and all was good. They told me he had most likely pulled a muscle. All these scares early on gave me an immense bond with this little guy. Once you are afraid of losing something or someone, you realize how much you genuinely love them.

Dozer is a funny and loving little dog. He is charming, he is attentive, and he does not leave my side no matter where I go. He gets a mad case of the zoomies every night some time between 8:00 p.m. and 9:00 p.m. and he can go from zero to what seems like one hundred miles per hour in a heartbeat. He will literally go from energizer bunny mode to sloth mode in a matter of seconds. He absolutely loves toys and can play for hours. It does not matter what toy it is; he wants it. He will play tug-of-war with you for hours if you let him. He is sweet, he is loyal, and he is my love.

About six months after getting Dozer, I wanted a little girl just like him. I found two sisters: a blue fawn and a merle fawn. I immediately knew I wanted the blue fawn girl. However, my husband really liked the merle fawn girl. We ended up getting the blue fawn frenchie puppy and I named her Molly. We brought Dozer to pick up Molly and my sweet little boy who had never growled before growled at this sweet tiny little girl. Being the mama’s boy that he is, he was jealous! By the next day however, he loved her as much as we did. They were immediate best friends and made cuddling a non-stop event. I made sure to give Dozer just a little more attention than the new puppy and I believe that made all the difference in getting him to accept her so quickly. Molly is our little bulldog in every sense of the word. She is sweet and affectionate but also stubborn with a little bit of an attitude. She is my real-life baby doll. She crawls up in my lap, curls up, and demands her cuddle time.

While we never had a problem with Dozer chewing, Molly was another story. This little girl loved to chew anything made of wood. She destroyed the corners of our baseboards and the legs of our bed. But who can get upset with this beautiful, sweet little girl? We just waited it out until she stopped chewing to repair the damage. Molly was also much easier to train than Dozer mostly because she followed her big brother and did what he did. We trained Dozer and Dozer trained Molly. We got them both at ten weeks of age and Dozer took several months to potty train while Molly only took about a week to get it. Dozer is the epitome of a momma’s boy, but Molly was a daddy’s girl through and through. That was however until we brought Harley into our household.

Recall me saying that Molly had a merle fawn sister? Well, that was Harley. Harley had been adopted by another family who ended up returning her. When we found out she was returned, we knew it was meant to be. Even after we brought Molly home, my husband always talked about Harley and how much he liked her.

What can I say about Harley? Harley is our wild one. She’s as sweet and loving as can be but boy does she have a crazy streak. She is much more energetic than the other two and scares me with the way she jumps from the couch to the ottomans. Harley was very shy when we first brought her home. She would cower when we would attempt to pet her. It did not take long for her to realize that she was in a loving home and was going to be spoiled just like her sister and brother though.

Harley is extremely smart and hence very easily trained. She listens well and comes every time you call her name. She loves belly rubs and cuddle time. During the lazy times of day, you can typically find her resting her head on her brother or sister or cuddling on her mama’s or daddy’s lap.

While Dozer and Molly love everyone, Harley is leery of outside people. This is still a work in progress but is getting much better. She just needs reassurance from her mama that new people are okay.

While all three of my frenchies have distinctive personalities, they are all three the cutest, most loving and funny dogs I have ever had the privilege of calling mine. By the way, they are all mama’s girls and mama’s boy now! If you are on the fence about whether this is the right breed for you, I would say as long as you understand the extra expenses involved with frenchie ownership and their limitations in regards to heat and exercise and you have done your research, go for it! You will not regret it and you will have a best friend for life (or two or three). If you have any specific questions about French Bulldogs, feel free to leave a comment or send me a message on my contact page.