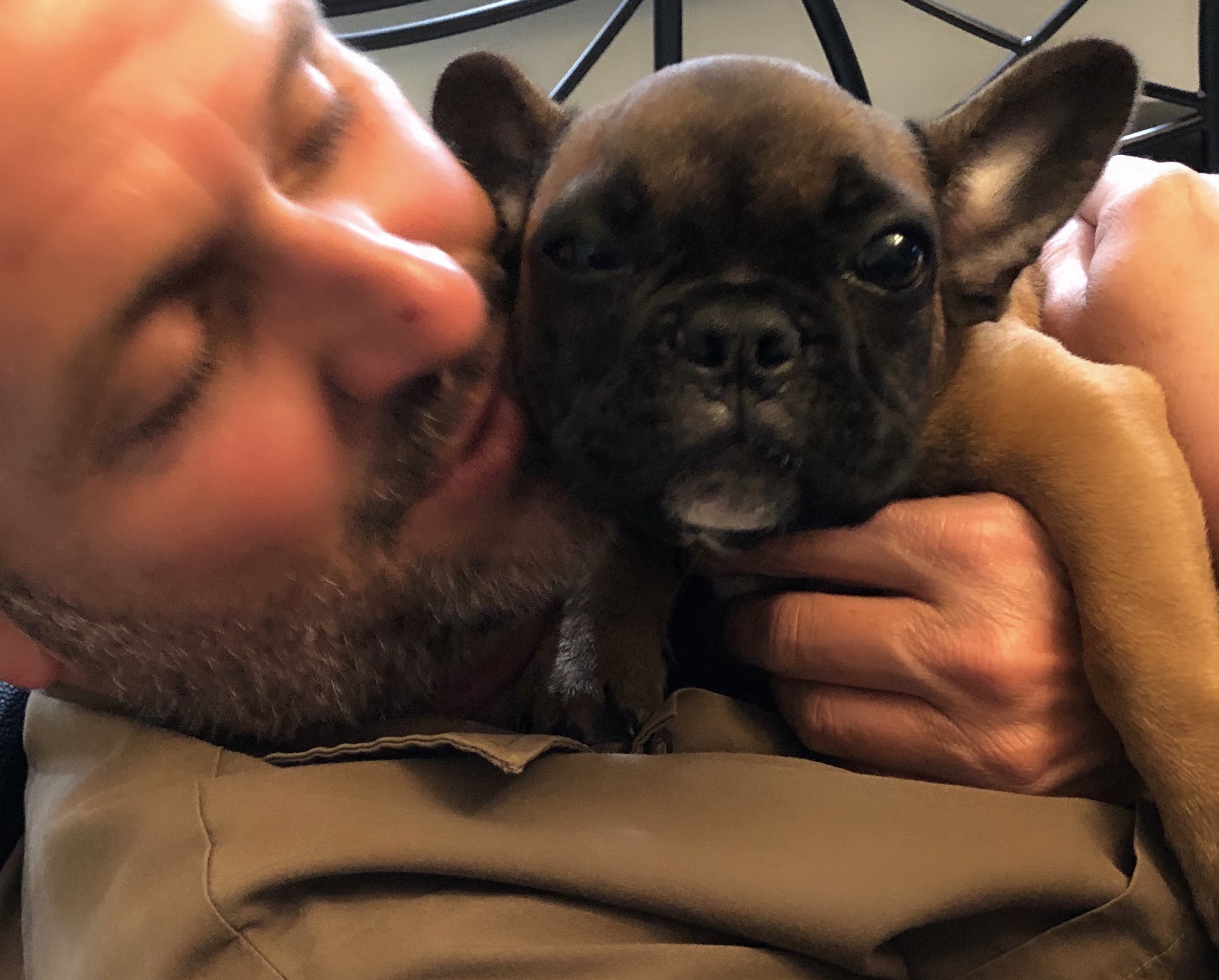 When I first met my husband, he was “not a dog person.” At the time, I was a dog mom to a bloodhound, Copper, who is as sweet and loyal as they come. My husband admitted that when he came over to my house for the first time and saw Copper, he was worried whether or not Copper would like him. He said he knew if my dog didn’t like him, he didn’t have a chance with me. I don’t know if that’s true, but that’s a topic for another conversation. Copper was a rescue from a dog shelter and I did not have much background on him when I rescued him. What I did find out very quickly was that he was scared to death of men. Over the years, his fear of men has lessened. However, he is still leery of new people, particularly men. When Glenn, my now husband, first came over, Copper walked right over to him, he pet Copper, and they were friends right off the bat. My husband and Copper have been friends ever since. However, if you asked my husband then, he would still have told you that he is “not a dog person.” He would actually say to me “a dog is just an animal.” Well, being the dog lover that I am, I of course did not feel this way and I would go out of my way to explain that humans are animals also and that his argument was not valid. After all, we are all in the same Kingdom of Animilia.

If you remember back to high school, we learned about taxonomy. Taxonomic classifications fall into categories from larger groups to smaller groups. If you recall, the order of the classifications goes like this: Kingdom, Phylum, Class, Order, Family, Genus, and Species. Scientific names are made up of the genus and species which are the most inclusive groups. Both dogs and humans fall under the same Kingdom of Animilia. Dog and humans also fall under the same Phylum of Chordata and the same Class of Mammilia. The Order is where we start to separate. Humans fall under the Order of Primate while dogs are in the Order of Carnivora. If you keep categorizing into the smaller groups, humans fall into the Family of Hominidae while dogs fall into the Family of Canidae. Humans are in the Genus Homo and dogs are in the Genus Canis. Humans are in the Species Sapien and dogs are in the Species Canis Lupus. Wolves are also in the Species of Canis lupus. To further classify dogs, there is a subspecies of Canis lupus familiaris. This is how we get the scientific names of Homo Sapien for humans and Canis lupus familiaris for dogs. The point being that dogs and humans fall into the same Kingdom, Phylum, and Class. Therefore, in my opinion, you can not state that “dogs are just animals” without also stating also that “humans are just animals.”

Now that I’ve given you a little science refresher, let’s get back to my husband who was “not a dog person.” Glenn began to love Copper and Copper certainly loved Glenn. However, Glenn still did not care for other peoples dogs. Fast forward a couple of years and it was then that my husband came home and told me “I want a French Bulldog and I want to name him Dozer.” Well, as you may already know, we got that french bulldog and we named him Dozer! We were all more than smitten with this little frenchie puppy named Dozer from day one. I can not tell you how many pictures and videos I have of my husband snuggling, loving on, and playing with Dozer. Dozer stole not only my heart, but also Glenn’s heart. Very quickly we went from a one dog household to a four dog household. If you read my previous blog posts, you will know that six months after we brought Dozer home, we got Molly. Then a few months later, we picked up Molly’s sister, Harley. Our house is currently full of dogs and consequently full of love!

Now you have your have your cat people and your dog people. However, you do have those who are neither cat nor dog people. Glenn was neither a dog person nor a cat person. He is actually highly allergic to cats. Therefore, we will most likely never own a cat. However, I can not tell you how many people I have talked to and posts I’ve seen where people say “I was a cat person, but there’s just something about frenchies.” French bulldogs are even converting cat people to dog people. Is this because they are just so lovable that you can’t help but love these little munchkins or is it that they have catlike tendencies such as walking on the tops of couches? I tend to believe it’s a little of both.

Where do you fall? Are you extroverted or introverted? Are you open to new things or resistant to change? Are you agreeable or not so agreeable? Are you generally optimistic or pessimistic or do you consider yourself a realist? I would love to hear about your personality traits and your thoughts on this subject if you are a frenchie mommy or daddy. Let’s get to the bottom of this. Why do people who are not necessarily dog people love frenchies so much? Comment below and tell me your thoughts.

1 thought on “French Bulldogs: Not Just for “Dog People””